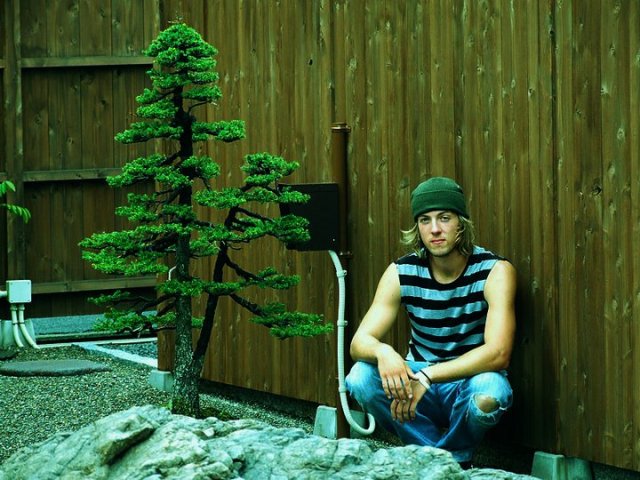 I’d been hoping to add to my International Bonsai Library, as my mind has been full of people who’ve influenced me but I hadn’t yet had the patience to pen to the blog. Matt Reel is one of those guys. I alluded to Matt earlier this month in the Taikan-ten post (he had some amazing photos from the show on his blog). I was incredibly fortunate and Matt was very gracious to agree to a brief interview via e-mail over the past month. Please enjoy our conversation below and stop by Matt’s blog to say thanks!

Me: How did you get started with bonsai?

Matt: Bonsai found me when I was walking around the mall in my Portland neighborhood on a typical afternoon, nothing out of the ordinary, until my eyes were drawn to a peculiar looking kiosk.  I was 13 and didn’t really know what to think about the little tree’s in pots, except that I was fascinated by them and had to know more.  I have always felt at home being outdoors in the great NW, so I knew at least that this was the glue that would bond me indefinitely to Bonsai.

Me: Were there any people at home in the U.S. that greatly influenced you?

Matt:  Now that you know my introduction to Bonsai was at a mall, it won’t surprise you when I say that the first person who influenced me was the Chinese guy who was selling these trees.  Most teenagers might go shopping to buy shoes or video games, maybe even see a movie after school.  I however, would hang out with the Lloyd Center Bonsai guy.  We became friends and I eventually ended up doing some part time work for him on the weekends.  Simultaneously I reached out via the yellow pages seeking anybody else in the portland Bonsai biz.  This is how I came upon my first teacher and mentor, Robert Guitron.  He was president of the Bonsai Society of Portland (BSOP) for a time and had one of the best collections in the Portland area.  I remember going to his place to meet him in person for the first time at this old warehouse building and thinking to myself, “where the heck does he keep his trees?”  When Robert opened the door, I was initially impressed by his sideburns (which haven’t changed to this day).  He welcomed me into his life and took me under his wing, letting me go on Bonsai trips with him, work on his rooftop greenhouse after school, and was always generous in teaching me what he understood about Bonsai and life… he had a big impact on me and my hunger for Bonsai kept on growing.  Randy Knight was another enthusiast I sought out in those days who inspired me to stay my path.  He is now one of the (if the not THE best) Yamadori diggers in the world… this guy is a beast.  There are many others who played a hand in my pre-Japan education, including the late Masa Furukawa, you will never be forgotten.

Me: How did you decide/ how did you come to the opportunity of working with bonsai in Japan?

Matt:  I left Boon out of the last question on purpose, in case anybody is wondering!  I met Boon Manakitivipart when he came to Portland to do our club meeting and private sessions in Portland.  After seeing him work I could tell that there was something different about him, the manner in which he worked and the beauty of his work and thinking, this is what I want to be, a professional.  My mind was set and I asked Boon how could I go about achieving this?  He said I would need to apprentice in Japan so I used my persuasion skills on him and he let me come to his place to be tested.  This happened during my senior year in high school, I stayed at Boon’s once during Christmas break and again during Spring, both two week periods.  After being under Boon’s close observation, I think he decided that I might have what it takes to make it as a foreign apprentice in Japan.  His lessons reiterate themselves in my mind to this day.

Me: Why did you select to work with Shinji Suzuki?

Matt:  I remember the first time I read an article of my Oyakata (this means father/teacher in Japanese) featured in the magazine “Bonsai Today.” I was, and still am so impressed with his work on Shinpaku Juniper, so natural and so soft; his attention to detail is matched by few.  after watching hid DVD entitled “Bonsai, Works of Divinity” I knew where I had to be.  Thanks to Boon, Mike Hagedorn (Portland Bonsai Villiage) and of course my mom and dad I am here, and close to being back in the Villiage!

Me: In your blog you recently talked about starting your 7th year as an apprentice. How long do you plan on staying in your current role?

Me: What comes next with your career in bonsai? Do you plan on returning to the states and opening your own nursery?

Matt: After I go back to Portland I think it will take some time before I can have my own nursery, but first I need to build up my income and tour my country teaching and hopefully adding to/improving our understanding of Bonsai.  Although I can’t wait to have my own nursery and be a part of this new Bonsai Villiage in Portland… Mike has planted the seed and we all need to help it grow!

Me: What is the most challenging thing you’ve had to do during your apprenticeship?

Matt: Its a long list but here are a couple that stand out. Eating everything on the table until its in your bursting stomach (apprentice duty) and during my first three months in Obuse there was no hot water in my room so I took cold showers everyday, sure wakes you up though! One time I stayed at work until 6 AM the next day wiring this big Juniper for a client, I think last year or the year before we got it into Kokufu, I guess hard work pays off!

Me: What was the most rewarding experience you’ve had so far?

Matt: The day I arrived to Obuse by train.  I didn’t speak any Japanese, had no idea if I got off at the right stop, but when I walked out of the station and sat down on a bench to collect myself, an old man walked up to a nearby tree and took a bird from it.  He walked up to me, said something, laughed and handed me this little chirping bird.  So Oyakata pulls up in his Benz, takes one glance at me with this bird and I remember this feeling of great comfort and belonging.

Me: What is your favorite species? Either to work with or just to view.

Matt:  I love working on Juniper, Red and White Pine, Spruce and Needle juniper.  I also enjoy working on deciduous, they just take a different approach, I love viewing tree’s in the winter and putting tree’s on display as the seasons change.

Me: Is there a species you dislike? (Owen Reich always jokes on his blog about how much Tosho hurt his fingers)

Matt: Working on Tosho can take a bit of adapting to, but in any case, don’t fight the tree, and if your hands hurt from working on pine or Tosho, wearing protective gloves might ease your pain but damage needles!  Use tweezers!!!

Me: A big part of what I’m trying to do on the blog is dispel some of the myths and bad information floating around the internet on bonsai care. Is there something or maybe a few things that you think people in general have the wrong instruction on?

Matt: Correct watering technique is always important.  It is winter now, if you live in a cold place, only water when necessary and before lunchtime.  Make sure the roots and pot have thawed out before you water them.  I don’t spend too much time myth busting online these days, but there are a lot of simple things people can do more of to keep their trees healthy and collection looking nice.  A basic understanding of photosynthesis will help improve your watering technique.

Me: Are there any particularly helpful techniques that you think most people in the U.S. don’t practice but would be especially beneficial?

Matt: Nothing new comes to mind, just improving and getting better at the techniques we already know about.  Wiring is maybe the most difficult technique in bonsai, any method that is not the correct and effective way is just an excuse or poor example.  If you are serious about learning beautiful wiring technique, you need to find a good teacher and do a lot of practicing.

Thanks again for the awesome interview Matt! Can’t wait until you get back to the states and start your teaching circuit.

Bonsai from the Colorado region

A bonsai enthusiast's blog for bonsai, yamadori and the Japanese garden

A plate a day

A lifetime's passion for Bonsai art and Penjing landscapes

A Novice Bonsai journey in Ireland

A blog about sculptures by Johnson Tsang

Welcome To My Bonsai World!

A Bonsai Enthusiast's Life With His Trees

Bonsai from Pennsylvania and beyond :)

Learning Bonsai in the Hoosier state